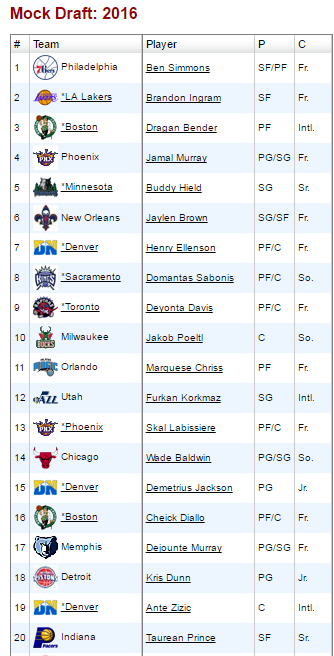 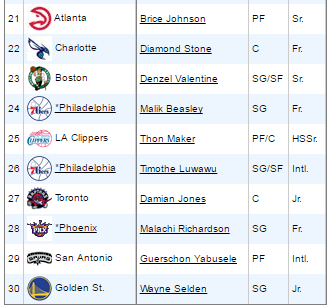 #4 Jamal Murray: Murray is similar to freshmen Steph Curry in some aspects –  he’s seen as  a combo guard out of college, he’s criticised for lack of athleticism, had a low assist average of 2.2 (Curry had 2.8), yet he averaged three made three pointers at a 40% clip as a shooting guard at Kentucky, averaging 20 points a game on a loaded team. Linking with 2015 draft gem Devin Booker would make the second best shooting backcourt in the league – and they’re both 19! Phoenix already has 2 starting quality point guards in Eric Bledsoe and Brandon Knight, but I see Phoenix trading away Bledsoe:

The 8th pick: Sacramento is in win-now mode if they choose to proceed with Demarcus Cousins as their cornerstone. They don’t need a new rookie, so trading their 8th pick for a point guard of the future is best. The Suns’ Eric Bledsoe is on the market, and would team up with Cousins as they did in college at Kentucky. The Suns would select a power forward like Domantas Sabonis with the Kings’ pick, fitting well next to top 5 pick in 2013 Alex Len as a bruising rebounder with passing skills.

#18 Kris Dunn: in this shooting-obsessed league, who wants a 22 year old point guard who can’t shoot? Dunn’s assets are speed and individual defense, and I think he could be a starter on a team with reliable shooters around him, but his poor turnover rate of 3.5 a game in college indicates he mightn’t even be able to find them as the lead ball handler. He is overrated and therefore slides.

20th pick: as I outline in this article, I think the Pacers would trade their 20th pick for a floor general like Jeff Teague. The Hawks would then choose a ready-to-go, defense-first small forward to replace Kent Bazemore if he leaves in Taureen Prince.

Any other questions about my selections or have some feedback? Comment here or tweet at me @skinnersource