The Phoenix Suns are rebuilding. They’re six  years from reaching the Western Conference Finals, led by Steve Nash and Amar’e Stoudemire. They let the latter leave for the Knicks, in what proved to be a mistake – the club has been on the decline ever since. They finished with a 23-59 record last season, despite having experienced players such as Eric Bledsoe and Tyson Chandler, and a disruptive Markieff Morris after the Suns traded his brother.

With little chance of truly competing with the current roster, and due to a mediocre #4 pick on a draft weak on All-Star talent and little growth from the season before, I think it’s time for Phoenix to trade away the assets that will let them win games, and look to the future.

They have young guard in Brandon Knight, age 24, and Devin Booker, age just 20 by the time the new season starts. The former averaged almost 20 points with 2.3 three pointers, and five assists despite sharing the ball with Bledsoe in the backcourt. Booker averaged almost 14 points and two and a half rebounds and steals per game, as the youngest player in the league, and has sky-high potential. They also have 2013 #5 pick Alex Len, a mobile 7’1″ center whose minutes have been stolen away once veteran center Chandler was signed last offseason.

Bledsoe and Chandler started in front of these aforementioned players last season, and that is unacceptable from a long-term point of view.

What can the Suns get for Bledsoe?

Most teams have their starting point guard in place – however, there is a suitor that can offer young assets to join Phoenix’s core. Sacramento has the #8 pick in the draft, and since they have the best center in the competiton in Demarcus Cousins reaching his prime, they should think win-now. therefore, trading the pick for Eric Bledsoe reunites Cousins with his old Kentucky teammate, and finally gives them a long-term option at guard. The Suns would also trade PJ Tucker, to shed salary and to give more minutes to 22 year old forward TJ Warren and their new draft picks.

With the #4 pick, forward Jaylen Brown is the best option (assuming that Simmons, Ingram and Bender are gone as I predict). He is difficult to stay in front of when he has the ball and has great defensive potential, at 6’7″, 220 pounds and a 7 foot wingspan at age 19. He can’t shoot consistently yet, but he can come in and defend the opponent’s top player from day one.

With the #8 pick, the Suns should go with a  power forward to complete the young starting lineup. Since Len is a finesse big that can defend the rim and block shots without pushing anyone around, Phoenix needs a bruiser. Domantas Sabonis fits the bill – a 6’10” post player who averaged almost 18 points, 12 rebounds and over 2 assists per game last season for Gonzaga. If given proper minutes, he could average a double double in his first season in the NBA.

At #13, the Suns should go with a backup point guard to replace Bledsoe. Demetrius Jackson, who averaged almost 16 points and five assists for Notre Dame last season, had an insane 43.5 vertical at the recent draft combine. He reminds me of Kemba Walker – shifty with the ball, and super fast. He can play alongside Booker or Knight, as the latter has seen minutes off the ball in the past, so he can get over 20 minutes a game from day one.

To get rid of Chandler and free up minutes for Len, they need to find a team looking for a veteran rim protector and rebounder that can start. That team is Minnesota – with a young core in place, Chandler could start alongside reigning Rookie of the Year Karl Anthony Towns, doing the dirty work while Towns develops. The Suns would get Nikola Pekovic, who has a large contract but one less year than Chandler, and would provide strong minutes and mentor fellow Euro Len, and Adreian Payne, an athletic stretch four who could back up Sabonis.

To fill out the roster the 28th pick can be used on another foreign big man like center Ante Zizic, and the 34th pick on tough rebounding power forward Guerschon Yabusele. Veteran point guard Ronnie Price can be retained to help teach the young point guards, the team option on shooting guard John Jenkins can be picked up, while champion Tayshaun Prince can play 10 minutes a game while providing further veteran leadership (assuming he doesn’t retire).

This team is in tank mode, but with the starting lineup at an average age around 22, they have high upside, and will likely be bolstered by a high pick in the stacked 2017 draft. 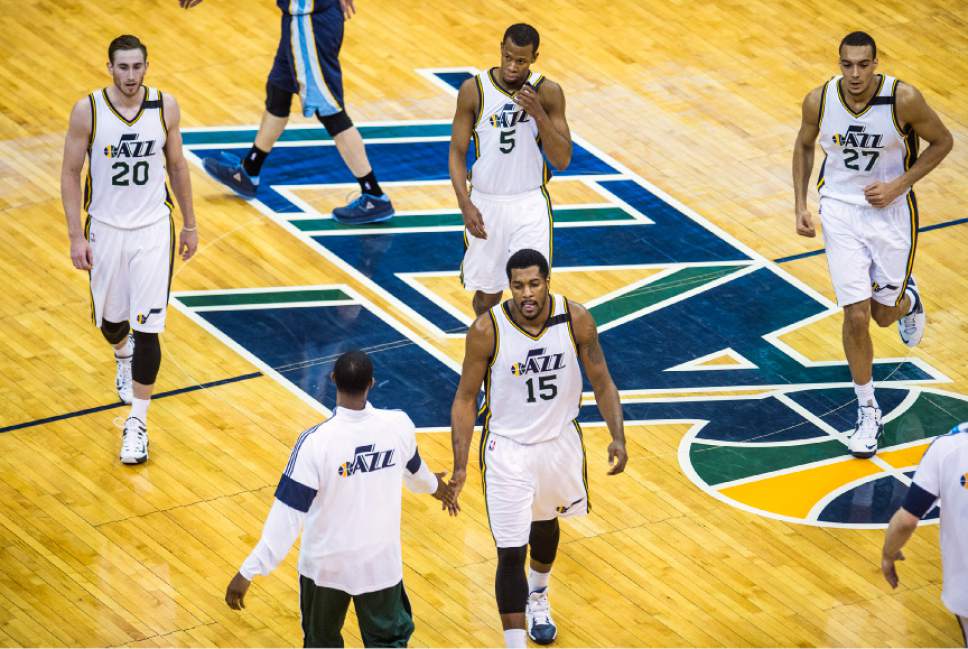 This article begins a series that will analyse what each NBA team should do in the 2016 offseason. As far as I can see, the NBA is a league where you’re either gunning for a championship or tanking – anywhere in-between is no-man’s land. With this in mind, read on:

The Utah Jazz finished with a 40-42 record last season.

They have a young roster with key pieces in Gordon Hayward, whose contract was extended for 4 years and $63 million before last season. He’s a ball handling forward/guard, who averaged nearly 20 points per game, five rebounds and nearly four assists in the 2016-2017 season.

They have Rudy Gobert, the French center with a standing reach almost at the rim, who averaged 2.2 blocks per game last season, nine points on 56%, most likely without leaving his tippy toes.

They have Derrick Favors, a power forward who has developed into a strong defender with solid touch on the offensive end after coming into the league as raw as a stick of celery in 2010.

Furthermore, they have a bunch of other young players in the mix: including guard Dante Exum, who missed the entire season with an ACL tear; Alec Burks, who was re-signed for 4 years and $42 million, an athletic combo guard; and Rodney Hood, a versatile forward with Duke-smarts.

The Jazz have the second youngest roster in the league, so they are still growing as a team. It’s too early to pull the plug and rebuild, as the team was only one win away from reaching the playoffs. Therefore, keeping the status quo and re-signing Rudy Gobert is the safer bet, banking on a lineup of Exum, Hood, Hayward, Favors and Gobert, with Burks as the 6th man, as the future contending team.

However, what if the Boston Celtics made an offer that the Jazz couldn’t refuse?

As I outline in this article, Boston would take this deal with open arms, as they get the pieces to contend for a ring, and a Coach Stevens favourite in Hayward.

The Jazz, meanwhile, would be tanking so hard that they’d get a high pick in the stacked 2017 draft, while they’d also get the number 3 and 16 pick of this year’s draft. Furthermore, they’d receive Brooklyn’s likely lottery pick, which Boston acquired in the Garnett and Pierce trade.

Furthermore, $38 million is freed up in salaries annually, meaning they can more easily re-sign Rudy Gobert for the $15-20 million a year he deserves as an elite rim protector – a crucial cog on a championship team (see Chandler, Tyson; Bogut, Andrew).

They’d get Marcus Smart, who is already a borderline lockdown defender away from the rim, as a 6’4″, 220 pound linebacker-bodied 22 year old, who draws calls with the best of them as a notorious flopper. He shot terribly last season, averaging 35% overall, but on this Jazz team all he’d have to do on the offensive end is shoot spot up jumpers, slash and post up undoubtedly smaller point guards.

Smart would play alongside the ball handler Exum, who has point guard abilities in a 6’6″ frame. At pick #5 in the 2014 draft, he is has potentially Penny Hardaway-esque upside. He’s coming off a full year of recovering from his knee injury, having taken a chance to observe the game from courtside, and hopefully practicing his jumper. With atleast 30 minutes a game, a number he wouldn’t have reached with Hayward and Burks there, he could average 15 points, 5 rebounds and 6 or 7 assists.

The #3 pick, as I discuss in my mock draft published shortly, would go to Dragan Bender. No-one else in the draft has his upside –  he runs and shoots like a guard and blocks shots like Gobert. He could be Andrei Kirilenko 2.0, albeit taller, at 7’1″. He’s skinny, at 220 pounds, so he’d likely see minutes playing at the 3 early on, but he could become an elite stretch four as he gets stronger…he’s only 18!

Kelly Olynyk could start at the 4 spot, where he can utilise his shooting and post abilities, without having to defend too hard with Gobert behind him. He could be the go-to option on offense, as he averaged around 18 points, seven rebounds and three assists on 40% from three per 36 minutes last season for the Celtics, who only gave him 20 minutes in a frontcourt logjam.

Amir Johnson is a throw-in to the trade, to make the salary swap fairer. His is an expiring contract anyway, and he’d provide rim protection and leadership on a team whose starters’ average age would be around 23!. Guard RJ Hunter would provide shooting and playmaking off the bench.

The team would be further bolstered with young talent by drafting Timothe Luwawu with the 12th pick, an uber athletic 6’7″ swingman from France, who at age 21 has been playing against men for over three years and would defend and shoot threes from day one. The Jazz would also have a the 42nd pick, which could be a draft and stash option, as the roster is pretty well filled already.

I have the team winning no more than 20 games, making it the last-placed team overall in 2016-2017, but their room for growth is insane. They have depth at every position, and every player bar the centers can play mutliple positions, meaning that young and promising coach Quin Snyder (who suddenly fits perfectly with this roster) can create matchup problems for the opposition.

If guys like Exum and Bender reach their potential, this team could reach the playoffs within 2-3 years, and contend for a championship in 5. Without the blockbluster Hayward trade, the Jazz would continue to struggle for a playoff spot, and get average talent in the draft. Since they’re a small market team and are unlikely to attract premium free agent talent, there’s only one wise option – becoming TANK CITYYYYYY!!

However, it’s still too early to blow the team up, so in my analysis of other teams I’m going to assume the Jazz keep their current core. But just think of the possibilities…Bender flying around blocking and dunking everything…Marcus SMart out-hustling everyone…Kelly Olynyk’s hair..