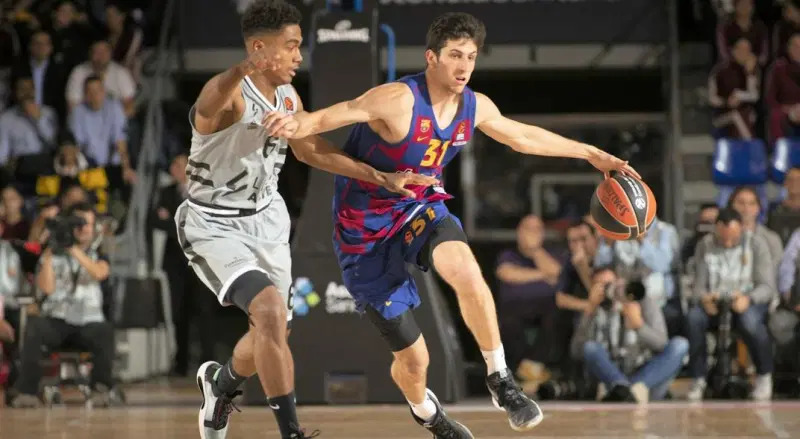 1. Leandro Bolmaro – 80,000 million (dollar value on a per-year basis), 1-5 (positions he can defend): Steph Curry’s skill in Klay Thompson’s body? Lightning fast at 6’7″, great handle, can find open man or drop a three over you, can drive to basket and finish at speed, can rise up and block shots, keeps very active defensively making him a menace in passing lanes and when trying to screen him. Can make very flashy plays but also has the fundamentals to be an all-time great.

2. Udoka Azubuike – 40,000 million 2-5: compares to prime Dwight Howard with how unstoppable he is down low. Having the highest field goal percentage in NCAA basketball history tells you something about his ability. It’s not just his physical ability – it’s his knowledge of where defenders are around him, and his willingness to take a drop-step dribble and raise the ball above his head with either hand. Rolls to the rim with good pace, meaning he is balanced enough to dunk a lobbed ball almost always. Not afraid to get his hands dirty getting loose balls off the rim. Just like prime Dwight, he’ll block your shot into the stands as well. Nimble for his size and keeps disciplined with footwork and hands out to deflect passed balls. Could average 25 boards per game per 36 minutes.

3. Tyrese Maxey – 20,000 million, 1-4: it’s hard to make a comparison between any previous basketballers and Maxey because he is just so good at his size. Fluid shooting stroke that has insane range. Can finish either hand and adjust mid air when finishing inside so his shots don’t get blocked. Disciplined defensively with great positioning. Sneaky athleticism, takes atleast two defenders to stop him in transition, and even if the defenders crowd the paint, he can knock down a three off the bounce on their heads.

4. Josh Hall – 12,000 mil, 2-5: in the mold of Kevin Durant and Brandon Ingram as a tall, long, ultra-skilled player with great athleticism. Can knock down almost any shot in the book. Can find the open man even with multiple defenders in his face, on the move.

5. Aaron Henry – 380 mil, 1-5: crafty, can finish with either hand at the rim with aplomb. Quick and consistent jump shot. Great passer, keeps eyes up on dribble to ind open man. Swift defensively and can jump passing lanes. Compares to Manu Ginobili.

7. Nate Hinton – 100 mil, 1-5: plays harder than everyone else, but has the skills to impact the game also. Can guard every position due to a combination of bulk, agility, intelligence and grit.

8. Charles Bassey – 70 mil, 3-5: very fluid for a near seven footer, runs the floor well and can finish from range. Good timing on shot challenges with either hand. Doesn’t box out enough but can still sky up and grab the board. Good passer.

9. Keith Braxton – 60 mil, 1-4: even without a strong left hand, he is almost unstoppable offensively. Can drive past and finish with his right from anywhere across half court, and has a nice pull up game going to his left. Combined with a dazzling ability to find the open man and the footwork and work ethic to be a nuisance defensively, he’s a great player.

11. Kristian Doolittle – 27 mil, 2-4: compares to prime Paul Millsap as an undersized big who is still nimble enough to guard on the perimeter. A sweet jump shot and hook game inside, with a good feel for the game passing and rebounding wise.

12. Kofi Cockburn – 24 mil, 4-5: like Nikola Vucevic as a bruiser inside who shows promise stepping outside and shooting from mid range.

13. Kenyon Martin Jr – 21 mil, 1-2: a physical force who can dunk from almost anywhere inside the three point line. Obvious practice with off hand shows with his ability to finish in a variety of ways. Is a unique player as I think he can average a double double despite being just 6’7″ tall, but is best used on the perimeter defensively due to his lateral mobility.

14. Cassius Stanley – 19 mil, 1-2: like Gary Harris as a he’s a little short as a shooting guard but has plenty of hops and playmaking ability to make up for it.

15. Aleksej Pokusevski – 18.6 mil, 2-3: rare seven footer who is best as a wing. Solid jump shot with good follow through, quite nimble for height, too skinny to bang down low, shows an ok handle, can finish with off hand and with hooks inside, good verticality to contest shots, solid passer.

17. Omer Yurtseven – 16 mil, 4-5: an old-school big who can get you a bucket when isolated one on one in the post, both inside and from mid range. Shows promise to stretch the floor from three. Bulk means he can get offensive rebounds.

18. Tyler Bey – 15 mil, 2-3: kinda like Andre Roberson, long and bouncy athlete with good basketball IQ, particularly when cutting and in shot selection inside.

20. Paul Scruggs – 12.7 mil, 1-2: crafty player in the Reggie Jackson mold, with long arms and ability to shoot off the bounce.

23. Aaron Nesmith – 11 mil, 1-2: catch and shoot player who is great running off of screens. Athletic enough to finish on fast breaks and get by defenders.

24. Cletrell Pope – 10.6 mil, 3-4: plays a bit like Jerami Grant as a bouncy forward who can be a lob target as well as hitting open shots. Good timing defensively to get blocks and deflections, runs the floor well.