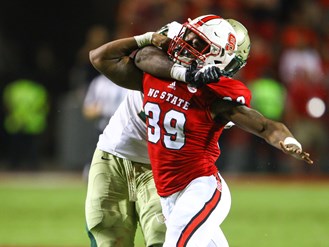 I’m listing these players according to their value as if they were NFL free agents. I also list their ideal position – note that “DE” means a 4-3 edge defender, while an “OLB” means a 3-4 edge defender.

1. DE James Smith-Williams ($27 million) – can be a top defender in the league from day dot. Is a low-profile prospect due to a litany of injuries throughout his career, playing in just 29 games over the course of his five year career at NC State. Nonetheless, when healthy, he can be dominant. His healthiest year was in 2018 when he had 36 tackles, 9 TFLs and six sacks in just 11 games. The injury history is something you’d have to look into, but I think he has the work ethic to bounce back – he gained 70 pounds of muscle during his college career, and was studious enough to earn an internship and job guarantee from a high profile technology company.

He tested similarly to legendary edge rushers like Whitney Mercilus and Ryan Kerrigan at the combine, as he was above the 90th percentile in the board jump and vertical jump for defensive lineman (according to mockdraftable.com), as well as posting 28 reps on the bench. This kind of pedigree makes me think the injuries were just ill fortune, him playing with his hand in the dirt while being undersized in his earlier playing days, or struggling to adjust to his newfound mass. Regardless, his talent is so overwhelming that I’d still take him with one of my top picks.

He protects the edge with aplomb, doesn’t over-commit to rush, keeps blocker away with long arms and sheds blockers to make tackles extremely well. Pass rush move is primarily a bull rush, but he can dip or pull at the right moments and when he knows where the QB is trying to get to as the play breaks down. Will draw plenty of holds because he has good bend as well, which will surprise many linemen as he sets them up with power beforehand. Great get-off, speed to power is incredible. Can sink into coverage on occasion and keep hips low and hands up for potential picks or batted balls.

2. QB Ryan Agnew ($26 million) – throws to only where his receiver can get the ball. Will always keep his team in the game as he can execute long passes or audible at line to change a play according to the defensive front. Understands where safety helps is weakest and is an expert at lofting the ball so that his receiver can make the downfield catch, or come back to ball. Great throwing action, high and with great bodily rotation. Has enough zip on passes to hit his receivers all over field. Holds ball with two hands and has great footwork, keeps eyes upfield but has a great internal clock, can scramble some and is solid enough to take hits. Great spatial awareness to know where pressure is coming from, as well as where lurking defenders are. I’d use him primarily as a pocket passer but he is nimble enough to be used on bootlegs on occasion. Can throw while running but this is not his greatest strength. Is really good at selling play action, has Aaron Rodgers level of confidence in hiding the ball and then being able to find open spaces with arms and/or legs as play develops. Is smart enough to know every route his receivers will run to release ball before his receiver is even open.

3. FB Rashod Berry ($18 million) – missed most of last season due to “undisclosed injuries”, but from what I’ve seen, Berry can become one of the best fullbacks ever. Has been listed as a tight end but is so good at blocking I think he’s best as a fullback, very long arms, balance and drive make him very difficult to beat. Can get upfield to make more than one block, and understands blocking angles extremely well. A perfect example of Berry’s ability is here (https://youtu.be/Hv0SVoYzFyY?t=25) (he’s number 13), where he pushes the defender five yards off of the ball into another defender, and he seamlessly changes the blocking assignment for the Fields touchdown. Shows some savvy, change-of-direction ability, and explosiveness in getting open, can make catches (high level basketball ability, as shown from his YouTube mixtapes, suggest his ball skills and athleticism). Strong legs, wicked stiff arm and quickness make him extremely difficult to bring down.

4. WR Tee Higgins ($17.7 million) – you cannot deny that a reason for Trevor Lawrence’s college football success has been that he can just wait for Higgins to get open, and even if he doesn’t, just throw it up and let the 6’4”, 220 pound super-athlete go up and get it. Higgins combines elite measurables with impeccable savvy as far as getting open with his routes, including in the end zone where space is more cramped, as well as making a catch and rotating to be able to survey the defense ahead of him to gain yards after the catch with his long stride.

5. G Cordel Iwuagwu ($17.4 million) – is so quick that sometimes it’s hard to find him on run plays. Can get to second level with ease and shows good understanding of how to make initial contact and move forward, creating lanes while changing blocking assignments. In pass pro, can get pushed backwards somewhat by a bull rush, but has long arms and good enough base to delay the rush enough to give the QB time to make a good decision. Is very nimble in pass pro and keeps arms up to ensure he can meet blitzers and stunts well. Plays hard, usually knows when to stop plugging a gap in pass pro and look for work, leading to delicious pancakes.

6. RB Anthony McFarland ($16.8 million) – has the big play ability of Tyreek Hill, with the vision of the best running backs in the game today. Unprecedented agility and base to evade tacklers, great hands.

7. DT Ross Blacklock ($16.5 million) – can become one of the best defensive tackles in the league from day one. Built like Fletcher Cox, has great get off, instincts as to where the holes are to close up runs or where to penetrate on pass rush, can beat double teams with ease due to drive in legs, brute strength and efficient hand usage. Keeps head up and can utilise spin move to take down QB or runner. Needs to clean up discipline, was kicked out of his final game for TCU for helmet to helmet contact on quarterback.

8. FS Terrell Burgess ($15 million) – does not allow runners to get outside of him, but can disengage and make the stop once the defender does run inside. Does miss some tackles due to less than ideal technique. Outstanding range, doesn’t overcommit, slows down to make sure he makes sufficient contact on the ball carrier. Can be a good corner as well due to loose hips and speed. Can be a ballhawk if he makes sure he gets his head around in time.

9. CB Kindle Vildor ($14.7 million) – extremely agile so that he can keep up with most receivers in any direction. Great ball skills. Sound in protecting edge on run plays and can tackle well.

10. SS Dowell ($14.5 million) – awesome at diagnosing plays, very quick in short areas to find the ball against run and pass. Very good tackler, could add a little strength but usually wraps up and brings down runners well. Can shed blocks due to his twitch. Can keep up with most receivers in space and make plays on the ball.

11. DE Cedric Wilcots ($14.4 million) – has a filthy spin move, which is a counter off of a filthy speed rush. Can use hands to bat away blockers’ arms too. Can beat run blockers with pure effort and solid base despite a slender frame for a 4 tech. Needs to put shoulders into tackles more but is usually strong enough to wrap up tackles anyway.

13. C Tyler Biadasz ($12.4 million) – supremely athletic, can move to second level with ease. Can also pancake guys in the trenches with great core strength. Sometimes a little unbalanced and ends up on the ground. Understands blocking angles to give space to his running back. Pass protection is good, keeps hands and eyes up to pick up rushers, can sometimes overcommit a little bit unnecessarily. Plays to whistle, not afraid to bury someone in the ground. Can become a top center in the league from day one.

14. WR Collin Johnson ($12.1 million) – 6’6” with great body control to make tough catches, can take hits too. Solid speed for a big man, isn’t awesome off line of scrimmage but can still scoot away from corners at times. Safe hands.

15. ILB Shaun Bradley ($12 million) – he has great play recognition but sometimes doesn’t have the motor to get to the ball. It’s almost as if he can’t be bothered. He might play up to competition at the next level, but you can’t rely on that. What Bradley can do is fly all over the field when he deems it necessary, while having the strength and power to crush blockers and make run stops. He can legitimately play as a mike linebacker in a Tampa 2 defense and cover the deep middle of the field – he’s that rangy. He could use a bit more leg drive in tackles as he misses some as he doesn’t wrap properly.

16. T Saadiq Charles ($11.8 million) – very nimble and disciplined. Strong enough to hold up against most defenders. Can block in space. Skills translate to guard as well.

17. OLB Chase Young ($11.7 million) – I prefer him as an outside linebacker as he is so twitchy that he can cover in the short areas of the field. Is also potent as a rusher, gets off the ball almost as fast as Von Miller. Isn’t overly bendy, but has good power to drive blockers back and has a solid motor.

18. OLB Jordan Mack ($11.6 million) – has played mostly off the ball but boy can he rush the passer. He is quick to the ball but doesn’t over-commit and run past the ball carrier, so you won’t see him miss on many potential sacks. He sniffs out runs very well, and can cover a bit, although my placing of him on the edge indicates he’s best closer to the line of scrimmage and only covering occasionally.

20. WR Henry Ruggs ($11.3 million) – despite short stature can get off line of scrimmage well due to footwork and hand usage. Sub 4.3 speed means he’s a downfield threat but can also evade tacklers with good spatial awareness, and can be a quality gadget player with jet sweeps etc. Can find creases in defense on routes, including in end zone. Reliable hands.