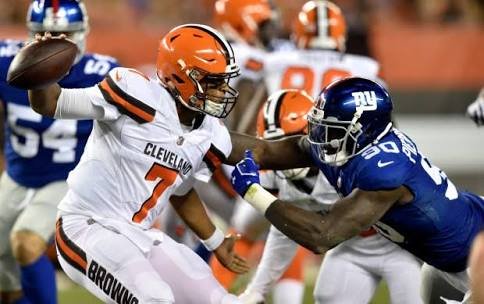 Kizer’s strengths are his arm and his ability to escape the pocket. He needs years before he can make difficult reads. Therefore, designed plays should be vertical, bench, slants and crossing routes. If those fail, he can escape the pocket or run through solid protection that the Browns offensive line provides, or dump off to their talented RBs and TE Njoku, who’s great after the catch.

Furthermore, they need to rely on their running backs more. I think the ratio of runs to passes should be 50-50. Cleveland are 23rd in the league in run plays per game, despite having a young QB and a good line. They are 3rd in the league in pass plays at 39.4 per game, compared to 23.4 rushes per game. I know that some pass plays are dump offs to their RBs, but the Browns aren’t a great threat in the passing game yet, so use that line and bang the ball! This will open up deeper pass plays on play action passes too.

There’s an argument that the Browns pass so much because they’re always  trailing. They are always trailing, but I don’t think  that they should abandon the run because of this. I had a look at Pro Football Focus, and when trailing, theyve passed 157 times, compared to 72 attempts rushing. 29 of those pass attempts are when trailing with 4 minutes to go, which indicates that a bulk of those pass plays are called even when time isn’t a huge factor. As a result, a lot of unecessary pressure is put on the pass game, where they’ve only completed 58% with 9 interceptions when trailing, as opposed to a safer and more effective 7.45 yards per rush when when trailing.

Ideally I think the Browns should run the ball on the 1st and second downs (with some play action passes to keep the defense honest). If it’s 3rd and more than 3 yards to go, get Kizer a pass towards the sideline or multiple vertical routes where there’s less chance of being picked off (as it’s harder for safeties to get there). He can also dump off to Duke Johnson where he can make plays.

I also think that plan should be implemented throughout the entire game, unless they’re leading, or there’s 6 minutes to go and they’re trailing by two or more possessions.

I’d also give Sammy Coates a go at being the #1 receiver. Kenny Britt and Corey Coleman aren’t reliable enough with their effort to be go-to to options, and they fit well as a #2 and #3 possession and slot receiver tandem anyway.

Let me know what you think by commenting, or tweeting at me at @bskinnreports !