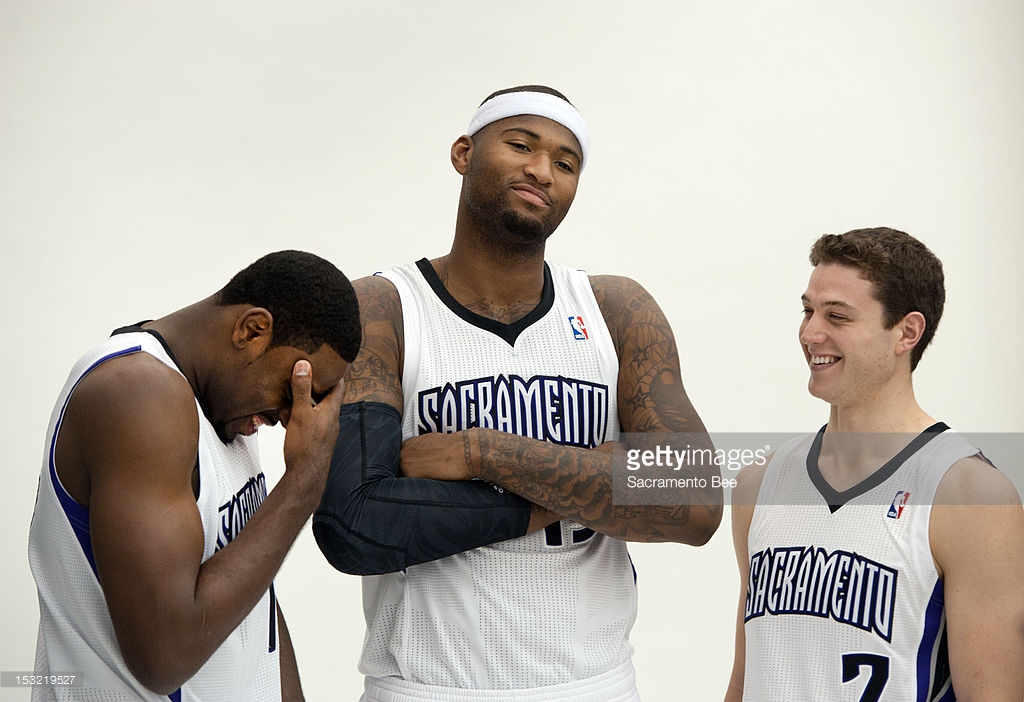 The Sacramento Kings of 2016 are in shambles. They have five centers on their roster, a starting point guard facing domestic violence charges, a coaching carousel with five different head coaches in the last four years, and their star player DeMarcus Cousins is evidently alienated by it all. So what happened?

I believe, with a few tactful roster moves, they could’ve been challenging for a championship over the last three seasons, spearheaded by their big 3 of center DeMarcus Cousins, shooting guard Tyreke Evans, and point guard Jimmer Fredette. Obviously this article has the benefit of hindsight, but my proposals are not dissimilar to what the Kings actually did in the last five seasons, except I propose slight changes, and wiser choices from a front office and coaching perspective. Here they are:

Prior to the 2011-2012 season, the Sacramento Kings had built a promising roster.

DeMarcus Cousins had claimed All-Rookie First Team honours, averaging 14 points and 8.6 rebounds a game in a flashing of his immense and now-realised potential.

Ball-handling combo guard and reigning rookie of the year Tyreke Evans missed 25 games with injury, but still averaged 17.8 points, 5.6 assists, 4.8rebounds and 1.5 steals a game, serving as a great long-term sidekick to Cousins.

They had a hard-nosed rebounding machine in Carl Landry, who they acquired in 2010, who relieved Cousins of rebounding pressure and helped develop a hard-working culture, in the same mold of Horace Grant for the Shaq and Penny Magic.

They had a solid coach in  Paul Westphal.

The season went by, and they won just 24 games. The aforementioned supporting cast proved to be inadequate, so the team would look to find their starting point guard and small forward in the offseason.

The 2011 NBA draft rolled around, and with the 7th pick in the draft, they could’ve chosen Brandon Knight, Kemba Walker, Klay Thompson, Kawhi Leonard or Jimmy Butler, instead of taking Jimmer Fredette in a trade for the Bucks’ 10th pick.

However, let’s assume that the draft played out exactly as it did, as hindsight is a luxury.

I think a big reason why Fredette became a bust is because Isaiah Thomas was better in the NBA out of the gates. Taken with the 60th pick in the Fredette draft, Thomas played 25.2 minutes per game as opposed to Jimmer’s 18.6.

But Jimmer can play. In the ’13-’14 season, he averaged 19 points on 2.8 threes per 36 minutes, at a 47% clip from deep and overall, with a solid 15.8 PER. While he would’ve mostly been playing against secondary units that year, he has flashed his NBA potential before, and without Thomas in the way, I think his potential could’ve been realised.

I also believe Thomas caused the demise of Evans in Sac land, as his ball dominant style took the ball out of Evans’ hands. Furthermore, the trade of Landry for shooting guard Marcus Thornton further contributed to Evans’ decline in Cowbell Kingdom.

Without Thomas or Thornton, the big 3 of Cousins, Evans and Fredette are established. Cousins is the go-to option in the half court, Evans is a transition dynamo and reliable scorer, while Jimmer spaces the floor and provides some offensive spark (and jersey sales!). The head office would then look to surround their new Big 3 with defenders and hard-nosed veterans.

At this point they had a hole at the small forward spot. They needed a 3 and D defender, so in free agency they could’ve gotten Caron Butler, Wilson Chandler, Shane Battier, or Mike Dunleavy Jr.

Let’s assume that they nab Mike Dunleavy Jr, who fits perfectly as an elite shooter, great veteran presence, and solid defender, who would be attracted to the Kings for the starting job offering, the immense upside they have, and the amount of money they could throw at him.

The Kings place 6th in the Western Conference by winning 40 games in the 2011-2012 season, with Cousins and Evans dominating, while Fredette eventually finds his feet in the faster NBA.

They lose to the Lakers in the first round of the playoffs, who have Kobe Bryant, Pau Gasol and a healthy Andrew Bynum, but benefit hugely from the experience.

With the 20th pick in the draft (which went to Denver in real-life) they could take Jae Crowder, Jared Sullinger, Draymond Green or Khris Middleton as their future at either forward spot, instead of taking Thomas Robinson with the 5th pick as they did in real life.

Let’s assume they take Jae Crowder (as no-one foresaw how good Draymond would become), who plays behind Dunleavy in the ’12-’13 season, but eventually usurps him as an elite defender and reliable shooter.

Having retained the previously mentioned supporting cast, and adding free agents to round out the rotation, the ’12-’13 Kings depth chart looks like this:

The game plan on offense would be Evans bringing the ball up in transition, while Fredette sprints to the corners a la JJ Redick to get transition threes.

Once the opposition defence is set, immediately get the ball to “Boogie” Cousins in the high or low post, where he can both score and pass at will.

Evans cuts, while Landry sets screens for Fredette or Dunleavy to get wide open weak side shots.

The bench unit gives Udrih control of the ball, with a screen-heavy offense that fully maximises Thompson and Whiteside, while Garcia and Crowder space the floor.

Defensively, Cousins leads the way vocally, and the rest of the squad are smart and athletic enough to play solid team defense.

So, they have the guard and big man combo that championships seem to require (see Bryant, Shaq; Bryant, Gasol; Kidd, Nowitzki).

They have outstanding shooting from Fredette and Dunleavy, and a steadying presence in Landry.

They have a quality bench, especially with the strong development of Whiteside.

..I believe this team could’ve become a top 5 team in the league challenging for a championship as soon as 2013, while being an uber fun team to watch:

Furthermore, none of their big 3 were over the age of 24 at that point, so they’d have over a decade to chase rings together, assuming they were all retained.

Let me know in the comments below, or tweet at me @notNBAgm